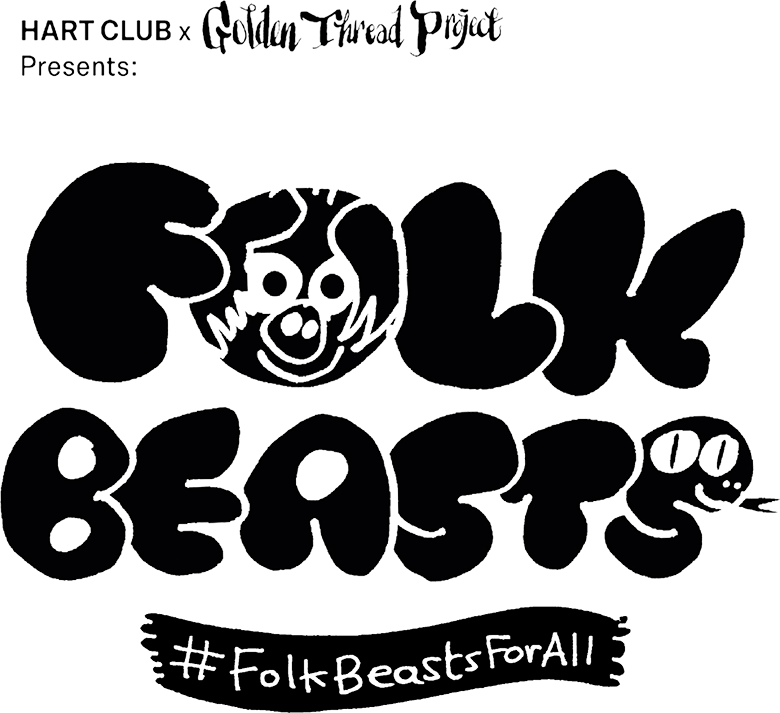 Earlier in 2020, when Covid spread in the U.K., design entrepreneur Aidan Saunders tried making things for people to craft for free using their home printers while they were hunkered down. Through the Golden Thread Project, along with Geoff Coupland, aka ZEEL, Saunders collaborated with the art charity Hart Club to produce “Folk Beasts” Risograph activity packs to send to neurodiverse people who had nowhere to go and nothing to do in lockdown. The packs offer creative prompts and guidelines for making handmade paper toys and games, and include a free two-color A3 Risograph print.

The project has grown to earn Arts Council Funding (“as you probably know, getting any funding is a miracle”) and the initiative is now distributing packs to organizations around the country. An online exhibition showing all of the material created from the artist packs is also in the works. Here, Saunders offers some more insight into the endeavor.

Before lockdown (Easter, 2020), we were discussing a collaborative project between Golden Thread Project and Hart Club, an organization that champions neurodiversity in the arts. They work with a network of charities and supported studios that facilitate artists with disabilities, dementia, brain injury, autism and other neurological variations. Their aim is to gain creative recognition with a wider audience for artists that create work that goes unseen. GTP’s aim is to work with artists, musicians, crafts-people and writers to celebrate folklore as a colorful and diverse source of inspiration for all, so we wanted to combine our networks and create a group exhibition centered around the theme “Folk Beasts.”

Our initial plan was to collaborate by hosting a series of artist-led workshops within our network of supported studios, and then have an exhibition of the results this summer at Hart Club’s gallery in central London. Then Lockdown happened in March, and we started discussing ways in which we could still engage with people and offer art activities to those who were now denied access to creative spaces. The idea we came up with to help was to invite a selection of artists to create accessible art packs that could be sent out to help people get creative at home. We wanted these packs to be beautiful objects that people would feel excited to receive, and would give the sense of being part of a larger collective project. This led to Folk Beasts being much wider in scope and application, going from a local, London enterprise to running on a national scale.

We were fortunate to receive funding from Arts Council England to upscale this project, and were able to invite 17 artists to create packs, each in an edition of 100. This grant meant we were able to cover our production costs, including paying the artists who designed the packs, and meaning all 1,700 packs could be made and sent out totally free to art clubs, schools and individuals around the country.

The idea is that pictures of what people have made will be sent to us or tagged on social media using the hashtag #FolkBeastsForAll, and we will be able to collate these newly imagined folk beasts to form a user-generated online exhibition in 2021. The amount of possible engagement is potentially enormous, and we are already getting examples of some fantastic responses sent in that will form the ‘on-growing’ exhibition, and look forward to the waves of interaction rolling in on this Folk Beasts theme.

“There is a wide range of people who will be involved in receiving the packs and in spreading the joy.”

The packs have each been expertly Risograph printed by Adam Donnelly, Hart Club’s resident Riso Print Wizard! Each pack contains a beautiful designed art activity plus a limited-edition artist print by the designer of that pack. A week was then spent packing them for distribution with the kind help of devoted Hart Club volunteers and some of the contributing artists “mucking in” on the job.

The packs are mainly being distributed amongst Hart Club’s network of charities and supported studios such as Headway East London, The Camberwell Incredibles, Action Space, Artbox, Garvald Edinburgh, Project Artworks and many more. We are also distributing some through some local and SEN schools as well as a local food bank Pembroke House. The Golden Thread Project also has a network of folk-obsessed friends, and fascinating folkloric museums and institutions who have education and outreach departments who spread the word about Folk Beasts.

Our contributing artists will also receive a selection of the packs to give away, so all in all there is a wide range of people who will be involved in receiving the packs and in spreading the joy.

The first responses were from the artists themselves, and we were really touched by the generosity, support and the energy they brought to the project. Everyone was completely invested in the task and we ended up creating a new community out of previous GTP collaborators and Hart Club affiliates, meeting weekly via Zoom chats to support each other, hone the project and make sure the accuracy of the folk myths. The GTP were there to work with and support the artists to make their most accessible and engaging responses to the Folk Beasts material, and consult on all matters folkloric. We enjoyed a lot of surgery-type meetings where the GTP team were like folklore doctors suggesting and prescribing different beasts, comparing exotic cryptids, fables and species like trading cards.

Hart Club’s founder Helen Ralli has been in contact with representatives from the charities they work with throughout this year to keep in touch with how all their members are coping during this challenging time. News of this project has been extremely well received, especially the level of artistry and production value of each pack and the variety of activities, which means they can be well-matched to the accessibility needs of the individual. Generally everyone we have contacted so far has been completely blown away by the content and scale of the project.

Packs are being sent out now and the official release and launch of the project [was] on Friday 4th Dec. We have already play-tested the packs at Hart Club with great results, and in a few weeks we will start to see individual artistic responses from recipients of our Folk Beast art-packs come in via email and social media. Then we can collate and curate the images and showcase a virtual exhibition online.

This outreach format was imagined through necessity to adapt at this time, and seeing it come to life, it feels like this format and project has so much room to grow. We have a few ideas where we will take it, but first we decided to focus all our energies on this stage!

In the future we would love to take this further and connect with similar supported studios across the globe. Also the idea of Folk Beasts and the ways that we can identify with, celebrate and learn from animal-kind has so many legs (pun intended) that we are looking forward to seeing where we can ride to on this beastie, where this mythic adventure will take us.